We start off this episode with some corrections and comments from the last couple of months.

The mailbag is full and ready to sift through. Be sure to reach out with questions, stories, memories, and more. You never know if your letter will be read on a future episode: podcast@retrowdw.com

Todd picked our random winner of 'The Disney Decade' - Jennifer is our winner! Congratulations and we hope you enjoy the book.

This month, we take you back to the early days of the Disney-MGM Studios. When the park first opened, it was mostly show and attraction-based with less emphasis on rides. You may have noticed before we got to the main topic here, but this episode sounds a little bit different. We are recording in <[{stereo}]> and this adds an amazingly fun layer to this episode, which is all about sound. Todd starts us off with our old friends at Birnbaum, most importantly 1989. This attraction was not very well known at the start as most people really didn't know what was going on in this show building. 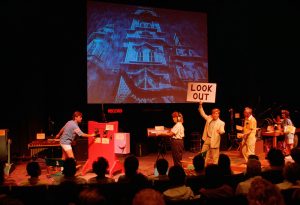 How as at Disney-MGM Studios on opening day, which we discussed in Episode 10. In the early days of the Disney MGM-Studios, movies and technology were used in much different ways compared to how they are now. Even our podcast process is so much more advanced than most everything at the studios back in the day. Sound design, engineering, and effects all had their own 'movie magic' way about them. Even to this day, the sound design makes or breaks a movie. If done properly, it makes for an outstanding movie experience and also have created some timeless sound effects over the years. The Monster Sound Show was an attraction that allowed park guests to experience this process in a fun way that put them right in the action of movie-making. Such a perfect attraction for those early days at the studios.

As a group, we discuss the involvement of David Letterman, which was somewhat an odd fit for the time period. At the same time though, we go over all the aspects he was used for in this attraction, including a Top Ten List. Todd leads us through this attraction which includes many sound gags for you, the listener. If you have never experienced this attraction in person, this episode will help you paint a great picture in your mind. What is amazing about the Monster Sound Show is that it starts Chevy Chase and Martin Short. Two SNL alums and also two actors who are in so many classic comedy films of the 80s and 90s. The timing of them being in this attraction is perfect. As we get through this attraction, don't forget to visit Soundworks post-show. The documentation of this area is very limited, so if you have any photos of video of this post-show area, let us know. This area is also where we learn about the styrofoam head that How brought into the parks in an attempt to capture the audio of some of these small post-show audio gags. Overall though, if sound and movies are your thing, you would have really enjoyed this attraction and area overall. The movie-making business back in the 80s was featured in so many unique ways throughout this theme park. We hope you got a sense of this attraction through clever audio and everything in stereo.